As the owner of KIOME Entertainment, Gigi M. Green is an award-winning independent writer, director and producer. She has produced multiple forms of content including short films, web series, and currently has a slate of new projects in development.

Gigi started her creative journey as a production assistant on the Emmy nominated Disney series, Good Luck Charlie, where she worked her way up to freelance writer of a produced episode. Gigi was the 1st and only Black writer for that show. Gigi is also the author of two new book series, Cleaning Her Closet: How I Gained Myself After Losing Mom. Volume 1 and Step by Step: How to get Your 1st Job in TV; as well as two other series in development. Gigi also holds a Bachelor of Arts in Interdisciplinary Arts and Performance and a Masters in Law.

Gigi is a survivor. A woman who came from less and wanted more in my life.

I wanted to expand, and writing allowed me to do that but I didn’t know in what genre or form of writing it would be in.

2. When did you know you wanted to be in tv production?

I’m the youngest and there is a large age gap between me and the next siblings. So growing up, I was somewhat raised as an only child; so there was a lot of alone time. I would write these little plays in my room using my stuffed animals as the actors, the audience and even the crew. So, I always loved to produce, lol. Fast forward years later, one of my brothers, likes old tv shows and he was watching this show called Rhoda

3.What barriers did you knock down while reaching your goal?

I am extremely humbled and proud to have been the 1st Black writer for the show. My goal was to get a job in TV so to be able to have a produced episode with my name as a single credit was beyond anything I could have expected. Truly, truly grateful. There are still shows that have not had black writers so the challenges continue but change is happening.

4. What is currently inspiring you to create during this time and what are you currently working on?

My inspiration comes from an overwhelming sense of ambition, my support team and the present and future. I work hard at being a little better every day. I enjoy writing but respect it as the craft it is so studying the masters and working at it inspires me. Also, I love my team. Love, love, love them. It is a great mix of loyal family, friends and colleagues that really want to see me win and I them. And lastly, I know who I came from, not only my mom and dad, but my grandfather, I stand on their shoulders knowing what they went through as well as the little Gigis coming behind me. I owe them.

5. How was it working on “Good Luck Charlie” and being the only black writer on the series?

I learned so much. First, the creators and showrunner were always kind and welcoming so they are the standard as far as I’m concerned when it comes to how to be treated in this industry. It was an honor to learn from people who had more experience and was willing to share notes.

6. Are you excited about more black writers being acknowledged and creating stories?

Absolutely!!!!!!!!!! We bring a different point of view that adds to the conversation. Whether it is your show or someone else’s, we have value and we matter.

7. What inspired you to write “Cleaning Her Closet: How I Gained Myself After Losing Mom” and How to Get Your 1st Job in TV?

Cleaning Her Closet was written to honor my mother but also honor myself and surviving the journey of redemption. I learned so much more about who she was as a woman, not just my mother, after she passed while cleaning her closet that made it easier to understand, forgive and value her. With that, there are others who are going through the struggle of forgiveness and healing, especially with their mothers, and if this book can help them, then writing this was worth it. How to Get Your 1st Job came after numerous people asked how I got my job in tv and so I wrote exactly what I did and how in my opinion others can do the same thing. Can’t promise you an Oscar or anything but I can tell you how to get in the door, lol.


8. Can you share a crown moment (a life lesson or a life blessing, a testimony or a moment when you have felt your invisible crown)?

I would say to women specifically, You are dope even on your worst day. Know this. The best gift you can give yourself is to validate your own self-worth.

I’ve had to grow into that and wasted so much time on believing the negative inner speak, allowing space for the imposter syndrome or giving energy to those who don’t serve me. Know there is one you and to cherish your unique contribution to this universe. That is my testimony. 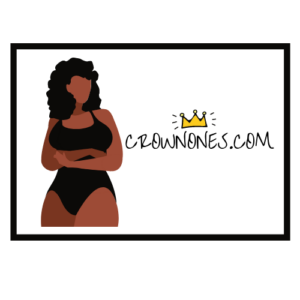